Manufacturing to get $520-billion PLI push in next 5 years: PM Modi

Prime Minister Narendra Modi on Friday said the production-linked incentive (PLI) scheme would lead to output worth $520 billion in India in the next five years, while industry asked for clarity on implementation across sectors.

Modi said the government was working at every level to promote industry through measures like ease of doing business, reducing the compliance burden, creating multi-modal infrastructure to reduce logistics costs, and constructing district-level export hubs. “Our effort is to reduce over 6,000 compliance burdens (for industry),” he said.

The prime minister was speaking at a webinar organised by the Department for Promotion of Industry and International Trade and the NITI Aayog.

Industry representatives included those from Apple, Sun Pharmaceuticals, and Mahindra & Mahindra, as well as industry associations from the PLI beneficiary sectors.

Job creation was a major item discussed. Sources said the focus was not on generating investment alone but to ensure that turnover rose, and jobs were created.

The PLI scheme was announced first for electronics in March last year, aimed at boosting domestic manufacturing and exports. It has since been expanded to 12 more sectors.

“In this year’s Budget, about Rs 2 trillion has been earmarked for the PLI scheme. On average about 5 per cent of the production has been given as incentive. This means, only through the PLI scheme, an estimated $520 billion worth of production is expected to happen in India. It is also estimated that the workforce for sectors in which PLI has been implemented will almost double,” he said.

Modi said with PLI in the automobiles and pharmaceuticals sectors, there would be much less foreign dependence in auto parts, medical equipment, and raw materials for medicines.

He said the energy sector would be modernised with the help of advanced cell batteries, solar PV modules, and specialty steel. Similarly, PLIs for the textile and food-processing sectors will benefit agriculture.

Modi said the government expected investments of more than Rs 15,000 crore in the next five-six years, leading to Rs 3 trillion in pharma sales and an increase in export worth Rs 2 trillion. Pankaj Patel, chairman of Cadila Healthcare, said: “We discussed in detail with the various government departments on how to implement the PLI scheme efficiently.”

Pharma companies like Lupin, Dr Reddy’s Laboratories, Cipla, and Cadila Healthcare have said they are keen to invest in the PLI scheme for formulations (medicines).

The companies have been categorised into three parts and the government is focused on increasing turnover or sales value rather than focusing on investment alone,” said someone close to the development.

The automobile industry wanted the eligibility criteria for the PLI scheme to be moderated so that more companies, especially in the auto component sector could benefit from it. 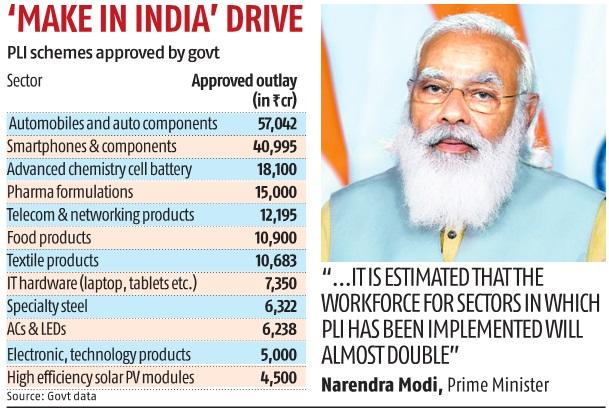 The incentive planned under the PLI scheme starting in FY23 and ending FY27 is around Rs 57,042 crore. Select automotive champions will be eligible for a maximum of three of the four schemes and incentives per company would be capped at Rs 8,556 crore.

The expectation is that PLIs would result in an additional investment of over Rs 1 trillion over a five-year period with the potential for creating 5.884 million jobs.

Arun Goel, secretary to the Ministry of Heavy Industries and Public Enterprises, said the PLI scheme would incentivise research and development and the focus will be primarily on R&D for electric vehicles and battery capacity development.

In addition to electronics, whose PLI was earmarked with an allocation of Rs 40,995 crore for five years, those in IT hardware and telecom equipment manufacturing will lead to an increase in production and domestic value addition, Modi said.

The India Cellular and Electronics Association (ICEA) was part of the webinar, represented by its Chairman Pankaj Mohindroo. The association has submitted to the Ministry of Electronics and Information Technology that the PLI scheme should not be taken as a subsidy but as a tool to become globally competitive.

“It is imperative to offset the disabilities vis-à-vis other countries and encourage global value chains (GVCs) and domestic industry players to set up manufacturing facilities in India. We need to build policies to compete with countries and not companies,” said Mohindroo. Among the ICEA’s demands is a review of the goods and services tax (GST) regime to boost domestic demand in the short term.

Business Standard has always strived hard to provide up-to-date information and commentary on developments that are of interest to you and have wider political and economic implications for the country and the world. Your encouragement and constant feedback on how to improve our offering have only made our resolve and commitment to these ideals stronger. Even during these difficult times arising out of Covid-19, we continue to remain committed to keeping you informed and updated with credible news, authoritative views and incisive commentary on topical issues of relevance.
We, however, have a request.

As we battle the economic impact of the pandemic, we need your support even more, so that we can continue to offer you more quality content. Our subscription model has seen an encouraging response from many of you, who have subscribed to our online content. More subscription to our online content can only help us achieve the goals of offering you even better and more relevant content. We believe in free, fair and credible journalism. Your support through more subscriptions can help us practise the journalism to which we are committed.